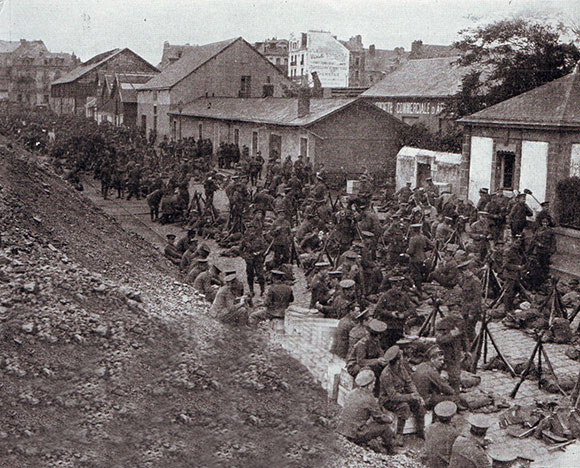 4th of August 1914, 11pm the British Government having not received suitable assurances from the German Government regarding preservation of Belgian neutrality, declares war on Germany and thus begins British involvement in the conflict that would become know as The Great War or First World War.

5th August 1914, the order is issued for The British Expeditionary Force (BEF) to mobilise and deploy to France and Belgium. The BEF was a unique force for its time – a modern and wholly professional and very experienced field force from the higher command down, when most European Armies were conscripted. Within its make up, were a number of the antecedents of today’s Rifles, with all of the forming Regiment’s represented in these opening moves of the war. The first units began deploying from Southampton to France on the 8th/9th August with further moves on the 22nd/23rd Aug and 8/9th Sep 1914. They would all variously find themselves engaged in the momentous opening battles of the western front campaign, Mons, Loos,Marne & 1st Ypres. Those former Regiments in the order of battle, and the formations to which they belonged are as follows:

The opening moves were begun, in what many hoped would be a short war; “It’ll all be over by Christmas”; but in reality would evolve into four years of war the likes of which Europe had never experienced – total and industrialised – effecting the home front as well as those at the battle front.

100 years on we will endevour to commemorate the major events of 1914 – 1918 and the parts played by our antecedents as The Rifles Great War Legacy, a legacy in which The Rifles can be justly proud.

(For a complete Order of Battle for the BEF in 1914, a good summary can be found at the following link: – http://en.wikipedia.org/wiki/British_Expeditionary_Force_order_of_battle_(1914)