The Battle of Imjin River, Korea 22-25 April 1951. The 1st Battalion The Gloucestershire Regiment as part of 29th Commonwealth Infantry Brigade were in defence holding a key historic invasion route from the north towards Seoul, a shallow crossing on the Imjin River.
The Battalion consisted of approximately 650 all ranks. 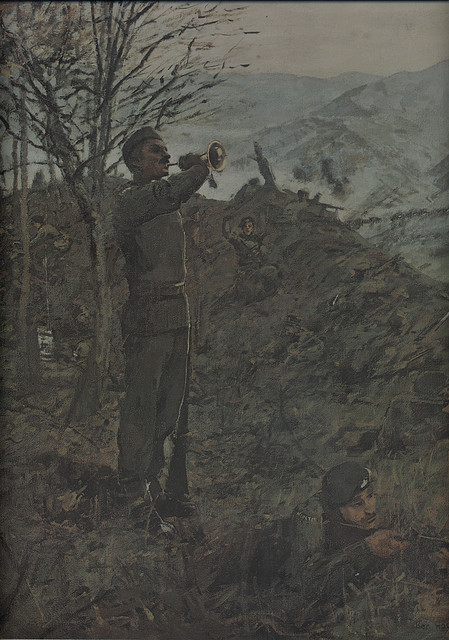 The battle commenced on the 22nd April when the forward standing patrols engaged the advanced guard of massive assault by the Chinese Peoples Army attempting to drive towards Seoul. By the morning of the 23rd, facing some 10,000 Chinese troops, the forward Companies of the Glosters were forced to withdraw to concentrate on Hill 235 with the remainder of the Battalion, later to be known as Gloster Hill. The Glosters were to fight on for a further 2 days against insurmountable odds, often driving off massed charges at the point of the bayonet; becoming increasingly isolated as the rest of the Brigade withdrew under the weight of similar hammer blow attacks by Chinese Divisions. By the 24th April B&C Companies had merged to one, due to casualties sustained. By the morning of the 25th, Brigade Artillery support had become untenable. Brigadier Brodie left the decision whether to attempt a break out or to surrender to Lieutenant-Colonel Carne, the Glosters’ CO and with ammunition and medical supplies spent, he “gave the order to his company commanders to make for the British lines as best as they could” on the morning of the 25th. Only the remains of D company under the command of Major Mike Harvey escaped successfully from Gloster Hill and reached the safety of friendly lines after several days. The rest of the battalion was taken prisoner, including Lieutenant-Colonel Carne. 620 men from the Gloucestershire Regiment, which mustered 217 men on 27 April, were on the Brigade Casualty list. 522 soldiers became prisoners of war and of them, 180 were wounded and a further 34 died while in captivity. 59 soldiers of the Gloucestershire Regiment were killed in action.The action of The Glosters and 29th Brigade had however so worn down the combat effectiveness of the lead Divisions of the communist assault that their attack was stalled and the South Korean capital saved. For this action the Glosters received 2 VCs (one to the CO), 1 George Cross, 2 DSO and 1 MC and were awarded a US Presidential Citation. The swift decisive action and boldness in defence demonstrated by the Glosters during this battle are duly seen as part of the proud legacy The Rifles have inherited from there forming Regiments. Imjin is one of the 34 battle honours borne on the Belt Plate Badge of the Regiment. To find out more about this piece of The Rifles story visit the recently refurbished Soldiers of Gloucester Museum