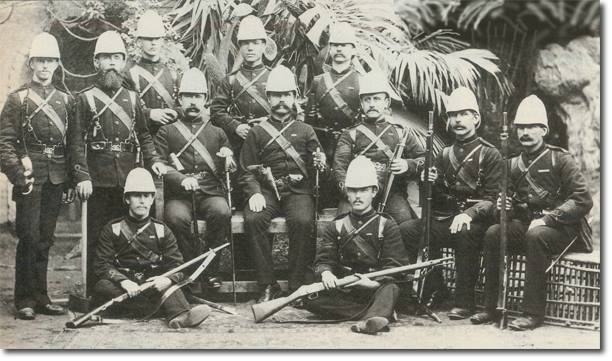 A photo of3rd Battalion Kings Royal Rifle Corps possibly prior to embarking for Egypt in 1882.

This photo was taken during the Anglo Egyptian War and River Nile Expedition that took place from 1882-1885.

The 2nd DCLI, 1st Royal Berkshire, 1st KSLI, 3rd KRRC and 8th (City of London) Battalion, The London Regiment (Post Office Rifles) all served in this campaign. The Anglo Egyptian War was fought between Great Britain and Egyptian and Sudanese forces under Ahmed Orabi, who had led a coup against Tewfik Pasha, the Khedive of Egypt and the Sudan. Success enabled British troops to occupy Egypt until the Anglo Egyptian treaties of 1922 and 1936 which gave back gradual control to Egypt. The volunteer force unit, The Post Office Rifles, whose battle honours have passed to the Rifles and who 7 Rifles have direct lineage to, provided a detachment of 2 Officers and 102 men to undertake postal and telegraph duties for the Force Commander General Wolseley.

3rd Battalion KRRC who acted as mounted infantry during the campaign. Rifleman Frederick Corbett of this Battalion was awarded the VC for his efforts to save his officers life during this campaign, only to have it stripped from him in 1884 for embezzlement. Lt Percival Scrope Marling of 3rd KRRC was also awarded a VC in this campaign and the Battalion received honours for Egypt 1882, Tel El Kebir, and Egypt 1884 for a short expedition against the Mahdists in Suakin.

To find out more about the service of our antecedents in Egypt why not visit the Museums in Bodmin, Salisbury, Shrewsbury and Winchester, all part of The Rifles Museums network the locations of which are on the interactive map under Rifles Museums.