During the Siege of Ladysmith in the Boer War, the Boers attacked two of the British tactical vantage points at Caesar’s Camp and Wagon Hill. Heavy fighting ensued with losses on both sides, as evening crept in, Lieutenant Colonel Park, commanding 1st Devons, took his three remaining companies to the aid of Colonel Hamilton at Wagon Hill, who was struggling to hold the position. The only way to dislodge the Boers was to charge them by bayonet. It is reputed that Colonel Hamilton asked Lieutenant Colonel Park; ‘Can you do it?’ to which the reply was ‘we will try’. The men of the 1st Battalion fixed their bayonets and charged. Despite coming under cross-fire and encountering a torrential storm, the Devons were not deterred and eventually the Boers retreated and the Devons were victorious. This proved to be a turning point for the Siege of Ladysmith. A telegram came from General Buller reading ‘Congratulations to your whole force on your brilliant defence, especially to the Devon Regiment’; another from Queen Victoria said ‘Greatly admire conduct of Devonshire Regiment’. 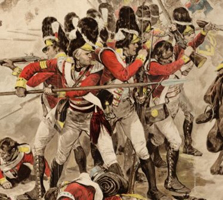 Egypt was a French colony during the Wars of the French Revolution and was the shortest route to trading in the East, however it also posed a threat as the potential staging post for invasion of British India. The Army was led by General Sir Ralph Abercrombie and the 28th (North Gloucestershire) Regiment were part of the Reserve Division under the command of Major General Sir John Moore. Whilst defending a key position of the British defences, they were exposed on low sandhills by the sea shire, and came under attack from Napoleon’s ‘invincibles’ who managed to attack the 28th Regiment simultaneously from the front and rear. The commanding officer gave the command ‘rear rank 28th, right about face’ and the 28th Regiment swiftly managed to face an attack from both sides. They turned the battle at a crucial moment and defeated the French for the first time in thirty years. The gallant and steadfast action from the 28th Regiment was awarded by a unique distinction of wearing the emblem of the Egyptian Sphinx on the back of the headdress as a back badge. 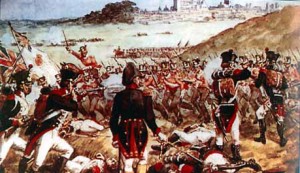 The Battle of Salamanca is a significant occasion in the history of The Rifles as all of our former regiments took part. The battle is described by historians as Wellington’s finest victory, and the turning point in the Peninsula Campaign. The record of the Light Division in the Peninsula War has rarely been surpassed and is justly seen as a memorial to Sir John Moore, the founding father of the Regiment. 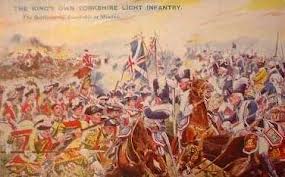 The King’s Own Yorkshire Light Infantry formed part of a force, which with the Prussian Army, campaigned against the French on the continent during the Seven Years War. Early in 1759 a large French Army under Marshal Contades had come up from the Rhine, taken Minden and was threatening the Electorate of Hanover, which had about 41,000 British and Hanoverian troops. On 1 August 1759 Ferdinand’s reserve consisted of a column of nine infantry regiments, under the Hanoverian General Sporcken, amongst which was the 51st Foot (later the King’s Own Yorkshire Light Infantry). Ferdinand sent an order to Sporcken through an Aide de Camp that ‘when the advance begins it is to be made with drums beating’, as repeated to the Hanoverian General he took it to be ‘Advance, drums beating with such Regiments as you have and attack anything in your front’. It was this misunderstanding which led to the action that ‘covered the Minden Regiments with immortal honour’, for to the surprise and consternation of the watching staff, the column started advancing by itself. Gallopers were at once sent to stop it. For a few minutes the column halted behind a thin belt of firs, but the battalions were burning to get on and suddenly stepped off like one man. Their march led them directly against the mass of French Cavalry, and soon the column had out-stripped the support of its own guns and was exposed to the fire of 60 powerful French canons. Over a distance of two hundred yards it calmly advanced through a storm of shot, the ranks steadily closing together as men were killed and wounded. Eleven squadrons of French cavalry hurled themselves against ‘that astonishing infantry’, but the column, remaining quiet until the horses were only ten paces off, received them with volley and bayonet. The cavalry were beaten off. On the way to the battle soldiers picked flowers and wore them in their uniforms. The Rifles follows the custom of the King’s Own Yorkshire Light Infantry by the wearing of a white rose on Minden Day. It is the custom that the Battalion holds a muster parade, where the adjutant reads the special order of the day; the Field Officers of the Battalion then distribute white roses to the soldiers. These roses are then worn in the beret for the remainder of the day. 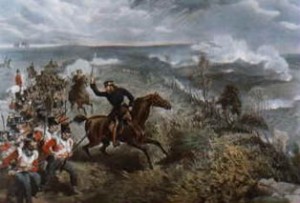 During the Crimean War against the Russians, an outstanding action took place shortly after the Battle of Balaclava. During the night of the 4th November great movement was heard as the Russians assembled at the foot of the heights held by the allied British and French armies, the Russians outnumbered the allies by 5 to 1. As first light came on a cold, wet and misty morning Sir George Cathcart prepared to assault down the rocky face against the Russians. 16 Officers, 15 Serjeants, 14 Buglers and 198 rank and file of the 68th Durham Light Infantry marched forward in their grey greatcoats ready for the attack. As Sir George Cathcart rode in behind them the Durhams threw off their greatcoats so that they could fight better and get at their ammunition – they were the only troops that day to fight in their red coats. The charge was sounded and down the hill the Durhams charged – their red coats attracting heavy fire from the Russian artillery. Sir George Cathcart was killed and two brigadiers severely wounded, along with many of the officers, the Durhams were reduced to half their strength. The remaining Durhams bravely pressed on, with the Serjeants and NCOs remaining commanding the troops due to the amount of officers that were casualties. The massed ‘Yakutsk’ Regiment of the Russians wavered and, when struck by the impetuous charge of the Durhams, turned and fled the field of battle. Ever since this feat of gallantry the Warrant Officers and Serjeants wear the Inkerman chain and whistle as an honour that has been passed down to the Warrant Officers and Serjeants of The Rifles of today. 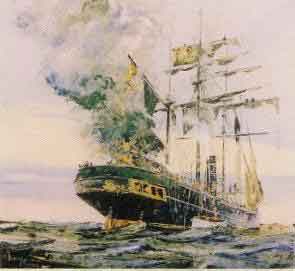 This is the story of the ‘Sarah Sands’, a troop ship that was carrying a large detachment of the 54th (West Norfolk) Regiment of Foot (later the Dorsetshire Regiment) as well as a considerable quantity of gunpowder to the Indian Mutiny. It sailed via South Africa, after experiencing some trouble with the crew who were arrested and then replaced with new crew in South Africa. It was some 800 miles from land in the Indian Ocean when a serious fire broke out. The crew, fearing the gunpowder would explode, quickly abandoning the ship, including some of the officers, and by an embarrassing error putting his children onto a lifeboat, the Commanding Officer. However, the troops acted quickly, throwing the gunpowder overboard and getting the women and children onto the lifeboats. They subdued the fire, and in a tremendous act of bravery, when realising the regimental colours were in the fire, going back into the ship to retrieve them. The ship was temporarily repaired and arrived in Mauritius ten days later. Queen Victoria ordered the report of their conduct ‘under the most alarming and dangerous circumstances’ to be published as a general order and read at the head of every Regiment in Her Service. 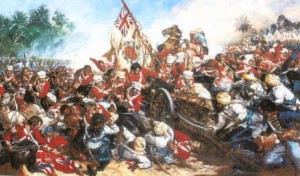 This was part of the Anglo-Sikh Wars and is considered one of the hardest fought battles in the history of the British Army. The 62nd (Wiltshire) Regiment was stationed in India and engaged in this battle. At the battle of Ferozeshah, the 62nd Regiment led the main attack on the strongest part of the Sikh lines and suffered heavy casualties on the first day, losing 18 out of 23 officers and 281 out of 500 other ranks. By the end of the first day of battle, no officers were left to take charge of the regiment. Command of the regiment devolved to its sergeants and non-commissioned officers. In honour of their leadership, 21 December became a regimental anniversary.
We use cookies on our website to give you the most relevant experience by remembering your preferences for repeat visits. By clicking “Accept”, you consent to the use of ALL the cookies.
Cookie settingsAccept
Manage consent

This website uses cookies to improve your experience while you navigate through the website. Out of these, the cookies that are categorized as necessary are stored on your browser as they are essential for the working of basic functionalities of the website. We also use third-party cookies that help us analyze and understand how you use this website. These cookies will be stored in your browser only with your consent. You also have the option to opt-out of these cookies. But opting out of some of these cookies may affect your browsing experience.
Necessary Always Enabled

Any cookies that may not be particularly necessary for the website to function and is used specifically to collect user personal data via analytics, ads, other embedded contents are termed as non-necessary cookies. It is mandatory to procure user consent prior to running these cookies on your website.